Rivers of blood - the Holocaust in Rezekne

Rezekne is a city with happy memories for me. It's where my wife went to university and where I discovered the charming habit of celebrating your marriage by locking a padlock onto a bridge. With several of those college friends to see in Rezekne, I was happy to check into the Kolonna Hotel and explore the city.  This is the point at which our friends suggested we visit the Ancupani Hills and our tour of massacre sites began (see previous two posts). 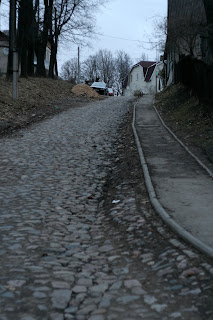 As we arrived back in town for a tour on foot, I hoped we might discover happier tourist attractions. Not so.

Having climbed down from the remains of the 13th century castle, where local youths now congregate to drink - because they can see the police coming - we took a left along the river, with the Cathedral high up on the other bank.
It's an untidy river bank with little development along here: the odd wooden house, old cars and wood yards, until you reach the bottom of a cobbled street.

And there at the corner of the street there's what looks like a black marble gravestone. It reads: '120 Rezekne's Jews were shot down on this place by the local Nazis on July 15, 1941.'


While marking the scene of what would have been (by my standards) terrible carnage, this stone also implies that local people who were either Nazis or working for the Nazis were involved. 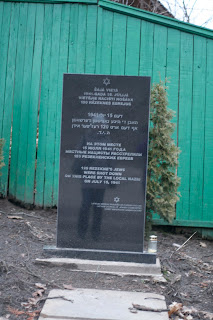 And so it proves to be. In this instance, research shows that the massacre of Rezekne's Jews is well-documented and turns out to be - sadly - an unexpected window onto the Holocaust in Latvia that reveals such barbarity, savagery and cruelty that it's difficult to imagine.

But these things happened, and we have an obligation to ensure they are remembered. Those who want to forget the past - for fear it will upset the present, or the future - ignore the hindsight that history brings.

I knew that Latvia's Jews were more or less wiped out in the war. I read about that in the Occupation Museum in Riga on my first visit to the country. But here in Rezekne, there's barely a word.

What follows are eye-witness accounts or testimonies taken from the Yad Vashem archives on the Jewish Holocaust in Europe.


The Jewish community of Rēzekne (called Rezhitsa until 1917) dated from the end of the 18th century.
During the period of the independent Latvian republic (1919-1940), several Jewish schools with different political and cultural affiliations operated in Rēzekne. In 1935 3,342 Jews lived in Rēzekne, comprising approximately 25 percent of the town’s population.
After the Soviet occupation of Latvia in June 1940, all private enterprises were nationalized and Jewish community institutions were closed. Some Rēzekne Jews were arrested during the night of June 14-15, 1941 and exiled to locations deep within the Soviet Union.
During the first week of the German-Soviet war the old border between Latvia and Russia was closed for everyone except Soviet workers and their families. Nevertheless, many Rēzekne Jews who had fled from the town gathered in the frontier area until the border was opened again on July 4. Many Rēzekne Jews managed to flee into the Soviet interior.
The Germans occupied Rēzekne on July 3, 1941 and, with the assistance of Latvian collaborators, began murdering Jews almost immediately. On July 4 the Germans ordered all Jewish men from the age of 18 to 60 to assemble on the market square. Latvian policemen rounded them up and took them to the local prison. On July 8 the town’s Jews were ordered to wear a yellow badge and banned from walking on the town's sidewalks and from wearing hats. On July 9 (according other sources, July 5), about 30 able-bodied young men were sent to the NKVD building and were murdered after being subjected to public humiliation. On August 3 the women, children, and elderly were rounded up and taken to the same prison, with the exception of women with little children, who were moved to ”the old prison.” 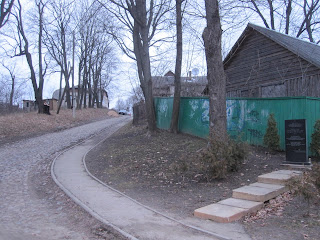 Most Rēzekne Jews were killed by the Germans between July and November of 1941 with the active assistance of Latvian policemen, including the Arājs Kommando, in three main locations in the vicinity of the town: the Jewish cemetery, Leščinska Park, and the Ančupānu Hills. Several dozen Jewish craftsmen were forced to work until they were killed in the autumn of 1943. Only three people from the entire Rēzekne Jewish community survived – the child Motya Tager, 57-year Chaim Izraelit, and his teenage nephew Yakov Izraelit.
So this massacre happened within two weeks of the Germans occupying Rezekne, with the thugs of the Nazi-supporting Latvian militia, the Arajs Kommando, doing the dirty work.
Early in the morning of July 15, 1941 members of Einsatzkommando 1b (of the Einzatzgruppe A), commanded by Erich Ehrlinger, with the assistance of local policemen, took between 100 and 120 Jews to the town’s park, situated not far from the Leščinska mill. The owner of the mill, together with his family, had been deportated to the Gulag by the Soviets in June 1941. The local authorities considered the killing of the Jewish workers from the two main factories of the town to be revenge for the deportation. The Jews were shot at the site and buried in a pit that had been prepared in advance. In April 1944 the bodies of the victims were exhumed and burned by the Germans from Special Unit 1005.

The stench in April 1944 with the Germans exhuming all these bodies and burning them to destroy the evidence must have been nightmarish. And having murder on this scale taking place on your doorstep, with a blood-crazed local Nazi commander ordering the mass execution of Jews, Russian prisoners of war and Roma, it's possible to see how little a human life would mean if that human is a Soviet partisan or escaped POW seeking refuge in the nearby hamlet of Audrini. A megalomaniac wielding such power of life and death would surely think nothing of ordering a village of 200 people to be wiped out.
The systematic extermination of Jews ended when Red Army liberated Rēzekne on July 27, 1944.  But in our tour of the city, our friend added a footnote.
As we passed a site in the centre, next to the Kolonna Hotel, bordering on the excavations for a new concert hall and arts centre, down the hill from the statue celebrating Latvian freedom, he said:
"When the Russians pulled out of Rezekne as the Germans moved in (in 1941), they rounded up all the people they didn't like.. and shot them."
The wartime horrors of Rezekne go on and on, unnoticed and mostly unremembered.
Posted by vincehunt01 at 01:45